Performance Animation with the Pioneers

When you think of the term "performance animation" you probably think of images of Gollum in Lord of the Rings, hunched over and creepily repeating "my precious". Or if you're like me and enjoy all of the behind the scenes, making-of content that fulfills my rock-n-roll, film maker fantasy, you are familiar with images of Andy Serkis hunched over and embodying every bit as much of Gollum as resulted in the film.

Either way, most people are familiar with the concept  of people performing in blue or green screen rooms with motion capture "balls", velcro attached to spandex jumpsuits as computers analyze and record location information.

However, with the recent gaming industry boom and resulting hardware and software developments, some basic motion capture technology has fallen into the consumers living room, likely without them even realizing it. Enter the Microsoft Kinect Camera. No longer do you need to dress like you are riding in the Tour de France to capture motion data or even perform live animation. Granted, the professional solutions in the industry are still top notch and by no means does the Kinect camera replace these technologies, rather offers a piece of it to the general public.

Naturally there's a world full of engineers, tinkerers and dreamers who will tap into available technology and tools to create brilliant experiences. Many people are plugging the Kinect camera into computers and writing code to use this technology for fun, educational, experimental, medical and many other applications. Our interest was to determine if performance animation is ready for live streaming and new business opportunities.

Last week, I had the pleasure of meeting a seasoned professional in the field of real-time, interactive animation - Gary Jesch of CHOPS & Associates. A referral from our LinkedIn network of media professionals (Freelance Audio Visual Technicians), it was suggested that I look into his business after discussing real time animation with a video engineer.

Turns out, Gary is one of the pioneers of live, performance animation. Creating virtual characters and performance animation solutions for numerous industries and clients for nearly twenty years. Although his most prominent character is his "CHOPS(Cyber Human On a Performance System)" character, among his dozens of various characters, his true character is himself. He was immediately open and easy to communicate with. You could certainly sense that Gary had a great "ear" for people. His live performances and interactions with people over the years has certainly created a polished experience and you can tell he truly enjoys his work.

His offered to participate in a networking luncheon we were having the following week was a no-brainer. We had planned an Imaginology open house to demonstrate live character animation streaming and CHOPS (http://www.chops.com/) was a perfect fit. His performance animation plugs directly into teleconferencing software to allow him to interact in real-time on your desktop or laptop computer. The best part may simply be that the system just worked. No crashes, no delays, no issues. This truly helps make the experience immersive. You are simply conversing with an animated character. I suppose this is the best form of technology. The technology that you don't even notice as technology, but rather as technology that just works and stays out of the way.

We set him up to engage people at the door as they came in and he stopped almost everyone in their tracks. His characters entertained, inspired dozens of questions and kept everyone on the edge of their tongue as they watched the characters in awe and wonder. This is where Gary truly shines, as he keeps the momentum and engages everyone in the room, simply continuing the conversation and interest. I can see where this technology has tons of potential for business. Not only do you get great value in attention and retention of your brand, but the animation can be recorded to create character animation sequences for other materials as needed (think live animation production services).


Imaginology announces it's latest addition to it's streaming media solutions: LIVE iPad streaming! Now your event, conference or message can be communicated to your audience in real time on the device of choice for today's progressive business environment, the iPad and/or iPhone. Not to worry however, we offer delivery to the desktop, laptops and other mobile devices all in the same configuration.

If your organization is looking for exciting new ways to communicate to your sales and marketing teams, contact us now for a no cost consultation.
Posted by Imaginology at 1:26 PM No comments:

Use of the iPad in the Medical Marketplace - A Practical Perspective

Since the release of the iPad, the medical community has taken notice of the importance of transmitting medical education and information across simplified devices.  Brands have come a long way since creating video loops for the patient waiting room, where ultimately the waiting patient simply wants to watch the local news programming or talk show anyhow.
We are now in the age of instant information access. Patients come into the exam room more informed than ever and there is often a large gap between the patient and qualified, clinically sound educational materials. Further widening this gap is the medical professional's inability to adopt this new technology in the care process. It's the wild west out there. Just as in the early days of website development, everyone now wants a custom iPad app. But no one really knows how it works or what to ask for.
Take, for example, a typical interactive timeline: likely, a brand started 10 or more years ago by relying on the physician-patient interaction, in the office, with branded patient education materials designed to raise the positives about its proprietary device or drug. Sometimes, these even got a bit fancy: slide rules or die-cut, rotating discs! Next came patient videos, online data capture and  DVDs. We thought we were really something when we advanced to standing kiosks, audio and video podcasting.
But the iPad brings an entirely new dimension. Aside from the obvious "wow!" factor, it may in fact actually increase a patient's comprehension of a complex concept or procedure. It's portable, eco-friendly (or at least, not paper!) and sustainable. The marketing and education can live on beyond the clinical setting; it's outdoor advertising, interactive, and physician and patient education all-in-one. At least for now, it's memorable. The visual display is impressive to most and visible to those with less than optimal vision. And iPad uptake among healthcare professionals, medical and surgical brands and consumers is steady and growing. Simply predicting the continued use of the iPad in healthcare is underestimation at its core; we have yet to see the myriad ways marketers and designers will enlist this particular form of interactivity to drive awareness, action and sales.
Posted by Imaginology at 2:07 PM No comments:

It's the wild west out there. Just as the early days of website development, everyone now wants a custom iPad app., but no one really know how or what to ask for. A qualified organization should have experience developing web apps as well as mobile apps. A known history of creating self contained software applications helps. ROM, kiosk, web applications and database design are a few good indicators that your team is qualified. Of course, a history of developing iPhone apps is a winner as the platform is essentially the same. Although graphic design and branding agencies will have a firm grasp on the terminology and marketability, they will often hire other development firms to program your solution and may not have the experience or knowledge of how to properly write specifications and plan the project for success.
As producer of the CVMD network, I helped create the world's first cardiovascular audio podcast and later the world's first video podcast of cardiovascular education. Our web development efforts have helped educate the medical field about new technologies and techniques and our asset management solutions and consulting have enabled real time posting of content to multiple devices at once.
Our first iPad app increased sales leads by 30% for a well known medical marketing giant (see Press) and our next project includes compiling educational material into apps designed to increase patient outcomes for a network of hospitals and referring physicians.
It's the wild west out there and there are no borders. Good thing we're saddled up.
Posted by Imaginology at 12:43 PM No comments:

I am special. My work is special. My life is special. My awards are not special. People think awards are special. Awards represent an opportunitist's method of appreciating your specialness. Usually you pay for your award in the form of submission fees and/or  awards fees.
Awards can be illusory and are a temporary reflection on a job well done. 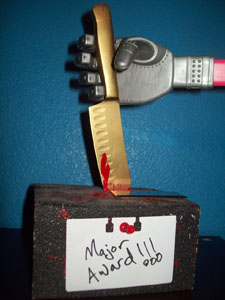 The nameplate keeps falling off of my award. I have stuck it back on numerous times and if I think back enough, I believe I even glued it at one point. My beloved award is so special to me because it reminds me of how perspectives change. I can think of a dozen different projects we have done that deserve far more credit. We have produced educational material that has informed people of new technology, treatments for diseases and marketed new devices for surgical procedures.
My father always had a "thinking man" pin that he won for some of his ideas in engineering back at Air Research. My grandfather was awarded for ideas in engineering and my great uncle even worked for NASA during the lunar landing. With a family of idea makers and engineers, I sometimes feel obligated to earn a certain amount of notoriety. The reality is however, is that today awards aren't often given for breaking new ground. They are mostly an acknowledgement of all that is "standard" and accepted by the masses as accomplished. That's not to say that they don't sometimes get it right, but I think the odds are pretty shifted in the favor of the mediocre nowadays.
I am thinking of designing my own award for employees of Imaginology. An anti-award perhaps.
Acknowledgement is important in people's lives though. It is a raw emotional cause and effect. Acknowledgement can perpetuate growth and opportunity. I think I actually enjoy acknowledgement of others work, more than I do my own. Maybe I should create an awards program?
I would give out thinking man awards. An award of classical thought and appreciation for new accomplishments in media and design. These awards would be limited and do not necessarily have to be given on a regular basis.  Perhaps it will become important. Perhaps I will make money on it. Maybe this is special.
Posted by Imaginology at 9:00 AM No comments: