Puppetry With Purpose at Imaginology

I have been blessed, gifted, granted and yes, even privileged to have lived the life I have lived and the work I have performed. Defining myself by the work of an Imaginologist has been no simple feat however. With as much support as one receives, one also experiences conflict, resistance and passionate discredit to any human effort. Or so it seems to me. The nature of the beast, perhaps. To please is to also displease. The tao. Evil and Good. Heaven and Hell. Whatever you want to label this duality.

Performing and producing seemingly silly feats of fiction, must be perceived as toiling in the realms of fantasy and disconnectedness from reality by some. 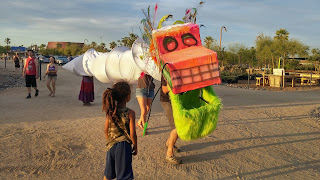 From another perspective, Imaginology is continually producing transformative experiences to colleagues, partners, clients, artists and the general public. Our Character Studio opened February 2020, just as the malaise of plague times had begun it's stronghold on the United States.

The timing seemed incredulous and perfectly aligned with the needs of the moment. Bony Tony had just set foot in a new home to produce web episodes as the world tuned into the confines of their quarantine and seeking a voice of reason for the pandemic sickness and death tolls.

Puppetry With Purpose has always been part of our program. Since working with the live puppet performance troupe Skeleton Puppet Theater, I have often identified moments of overwhelming joy and delight as an unexpected production artifact is generated. A "level-up" if you will. A surprising and welcome extra outcome which seems a result of the formulae of collaborators and contributors to the project.

A few examples include: 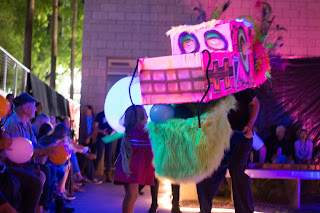 - AZDragoneers introduces transformational art experience in the form of a balloon with a secret message inside. Exchanged when popping, after writing a message for transformation on the outside.

- PTSD military veteran with PTSD sits awkwardly at lunch table discussing his project, but lights up and plays, smiles and engages entirely when introduced to Imaginology live green key studio and puppets.

- Larry The New Kid, a character purchased from a local toy shop becomes a leading role in a promotional commercial for FilmBar Phoenix. Father states that his daughter "had a breakthrough moment" in which he described her courage to perform as permission to "play" and remain curious and imaginative. 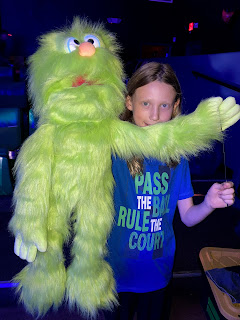 - Bony Tony character performs at Halloween 2020 to tears of joy by a local visitor who won the costume contest for wearing a 2020 dumpster fire costume.

- Filming The Skeletones band video in Studio 8 with UV black light. The characters popped immediately on the screen and showed us how much potential a skeleton band has.

- First time back yard performance of Flesh Eating Ghouls From Outer Space and someone asks if we can make a movie of it, because they want to see it again. Imaginology produces DVD in 2004.

- Breakthrough character design and development moment as high school student visits Imaginology studio to design, sculpt and animate his own punk-rock reptile character. Kid Tyke picked up several illustration jobs and has since progressed into his college career at NAU. 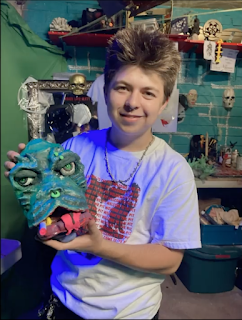 Although these are examples of observation, they also qualitatively confirm the effectiveness of intention based work. A statement from the individual themselves is sometimes the only payment for the work performed. The cash or credit exchange for labor conducted is for another topic, yet these moments are the soul food that encourages the work to continue and serve as examples of how intention guided work yields results directly related to the intention/goal.

Puppetry With Purpose may very well be a hidden element of our intention to "improve the human condition" being an underlying mission. The surprise inside the box.

This is not currently a marketable term, but we have now written it into existence "Puppetry With Purpose". Imaginology and it's associated partners shall be the primary benefactors, as so many have committed their time, energy, beliefs and other resources to enable Puppetry With Purpose at Imaginology. Of course, the opposite may also be true, if only to remain balanced in statement, not action or intention.

Posted by Imaginology at 1:26 PM