Production Culture - The Cult of the Black Shirts

At a very young age in elementary school, I was to be in the Christmas pageant. I was 5 or 6 years old in first grade maybe. I do not remember too many aspects of the performance. I sang with the rest of the class. But somehow, I had managed to wiggle my way into the coveted position of opening and closing the theater curtains at the beginning and end of the program. It seemed the most important of jobs. I recall the grand scale of the drapes lofted from upon the highest railing you could imagine at that age of epic giants and little people. The ropes seemed large and ascended into the sky into the void at the top of the curtain. 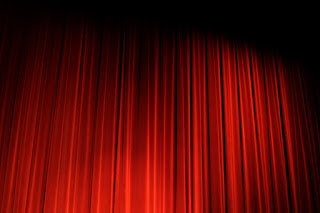 The vast mass of the material was enough to completely annihilate a 6 year old, yet, I was allowed to hold the rope until it was time to pull. The teacher was producer and stage manager of the show and ensured complete discipline in handling the unique opportunity to present a show to the public. The teacher would tell me when to open and close the curtain. I recall the energy and anticipation of the audience as they gazed upon their own shining stars of the show, as I continued to pull the ropes and reveal the magic that awaited all. The awes and laughter then wafted throughout the cafeteria hall where the stage consumed the far end were loud and full of joy.

This continued through middle school with leading roles and in high school, as I continued to work in theater. If you spend over 100 hours in the high school theater department, you are considered a thespian. I double lettered in theater and technical theater production in high school. During this critical time of teenage angst and confusion, I began to identify with the odd culture and characters that haunted the halls and green room's of an ancient tradition. They were unusual thinkers, and actors in the play of high school life. They rarely conformed and the most bold players on the stage were some of the smartest people I had ever met at that time (and maybe since).

It was in high school theater that technical production began to take a firm hold as the lighting consoles, sound mixers and cues were important aspects of the overall production. I was hooked. I worked the art and set construction departments, but found the technical aspects to be of most interest as the Channel 1 network cable TV channel was installed as a pilot program at Apollo High School as part of a national high school news network. I then started editing video on a VHS digital mixing board and would bring the VHS camera recorder we had to our stage rehearsals for behind the scenes journalism and promotion of the current high school stage play. This was my first mashup of theater and video production that would later become my career.

Now, as a Graduate of Animation, Multimedia and Digital Culture studies, Professor of Animation and an independent production technician, I continue to be fascinated by the range of characters, skillsets and aptitudes that make up the production field and profession. I have recently decided to share these insights and aspects.

Creating corporate media productions, means installing and/or operating audio visual production equipment to enable individuals and teams to communicate their message to as many people as they wish to design for. Often times in an entertaining stage production, using powerpoint presentations, stage cues and accompanying audio and video playback cues. 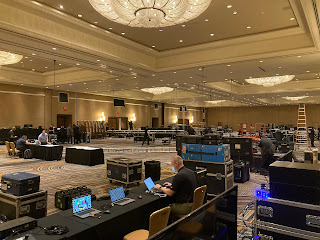 As a production professional, I am given many different assignments to operate a production environment or specific piece/line of equipment to satisfy the client needs and the role of the "technician" for that particular production event or "gig" as we refer.

With a background and degree in animation, I tend to lean towards loading and creating graphics, presentations and keynotes over the years. However, adaptability is key in production technician work and you can easily find yourself in another role as the production demands.

That said however, as a stage performer I understand the significant importance of a script on set. Writing an outline, script or establishing a "show flow" are extremely helpful tools to have guiding the production. Some of the worst experiences as a technician are with productions that do not have a script or a sequence of events written or rehearsed.

All success that comes from a production is most certainly a team effort and helps define a culture of trust and mutual respect for the circumstances of a production. This can have transformative effects for those involved and often builds camaraderie and repore with one's peers.

Over the years, I have taken notes and conducted interviews with production crew members and recorded their thoughts about the nature of "production culture", aka, the "cult of the black shirts".

In addition, and with great generalization, I have recorded the following characteristics as being common amoungst this group of professionals:

- Have a rigorous work ethic

- Skips lunch/breaks/sacrifices for the show

- Have specific overtime and break schedules

- Lunch walk away is different from working lunch/provided meal

- Independent by nature of definition “freelancer”

- Sometimes non-hirable elsewhere either due to attitude, aptitude or specialization

- Some can be arrogant or challenging about their technical acumen

- Live by the clock - timers and runtime

- Some are heavy smokers and/or vape

- Full of disaster story's and/or highlights

- Most are self employed entrepreneurs with little to no health benefits

Productions often require numerous technicians to setup, install, operate and strike (remove). The positions can be varied and often have overlap with other similar positions that might not be hired for the "gig". 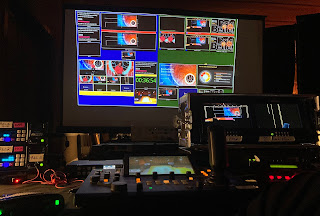 Some of the positions of the individuals might include: 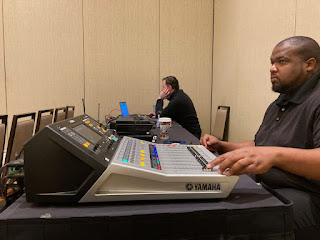 As freelance artists, many production people are also involved in music production and recording as well as video and film projects. It is not uncommon for your audio engineer (A1) to also be a musician, current or former for example. It is also quite common for production technicians to work on series development. A series of event productions, seminars or summits are examples of corporate series development. In some cases a show or production is so successful, it inspires additional programs to be developed and the team to be reassembled for additional future dates. This is often considered a good thing for independent producers, as it establishes a consistent event schedule and repeat business.

Some individuals are comfortable working with clients and interacting with other people. Some technicians however, are most comfortable behind the scenes and not interacting as much with the clients. This distinction is important to know as either corporate presentable vs behind the scenes stage hands are hired. General session (GS) technicians are considered specialists at working directly with the show and often times have more client interactions as a result.

Many (but not all) technicians are formally trained. Although it is not a requirement, often times technicians were trained in film, theater, sound or recording engineering programs. Skills learned through experience vs formal education are numerous. As a formally trained technician, I can honestly say I have learned as much in the field as I have in the classroom about production technology. The hands-on nature of working a production is an additional enhancement to any formal training program and are often required hours for media programs. 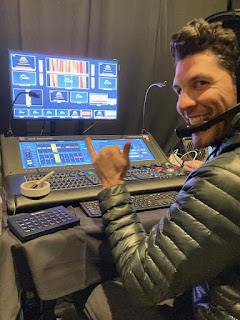 The business of media production is reputation critical. Satisfying your client and demonstrating competency is the standard by which you set for yourself and those around you as you implement the production for your client. If your client is unsatisfied with your performance or the equipment, it is your ass on the line. In addition, those who are working with you are at additional risk for scrutiny as the standard is set by the lowest common denominator of competence. In other words, your reputation and future work depends on your being on-time and on point. That said, production technicians tend to be open and willing to share their experience and knowledge when the time comes for someone to help. This helps create a culture of learning and teaching.

Each production has its own dynamics that are specific to only that show. However, the process of load-in and setup, then testing and rehearsal, followed by showtime and strike is most commonplace.

Operation is conducted after all equipment has been setup, installed and tested as working. It is common however, for equipment to be added or replaced as needed throughout the gig as technology fails, technicians see opportunity for improvement or if glitches occur. 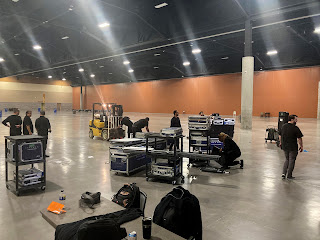 Cut, Strike and reload trucks. Some productions will include a strike crew that comes in at the end of a show and starts to remove or uninstall and box or crate equipment for load out. Equipment is then staged and prepared for loading into trucks. These efforts often require additional stagehands and requires the operators of the gig to contribute to the packing and load out of equipment.

Overall appreciation for the industry seems prevalent. Discontentment comes with overworked or underpaid individuals. Progression through the industry can sometimes be difficult for those behind the scenes or without confidence in their abilities.

Work conditions can be varied and often requires high pressure performance. Clients will sometimes test a technician's abilities or make requests beyond the scope of normal production standards. Last moment requests and changes can create difficult situations wherein changes cannot be made without disrupting the show.

Work is seasonal and has great demand during the first and fourth quarters in Arizona. While other parts of the country might see an increase in business over the summer, production work appears to taper off during the hot summer months in Phoenix. Certain sports seasons not accounted for, however as certain individuals work racetracks or summer concerts, much of the corporate work seems to wane as executives take summer holiday's with the family. This makes the industry highly adaptable for technicians who needs summers off for their own family's or to simply enjoy some holiday time. This seasonality can present challenges to technicians income however and must be properly accounted for in order to survive through the lean times of less work labor and income. In addition, the thirty day receivables means invoices sent after a gig is completed will not be paid for a full month and requires additional planning to properly budget.

In conclusion, the production culture and industry is diverse and professional. It is notable however, the general ratio of men to women in the business of production is heavily skewed towards males by 90%/10% in my experience. This ratio is slowly changing as women enter the field, however there is a long way to go in terms of equal representation of women as professional production personel. Perhaps it's the nerd factor that production technicians exude that is a turn off for some women? I have met numerous highly professional women in a multitude of roles from crew to director and have been nothing but impressed by those currently representing non-males in the professional production field.

Much of what else can be said about this industry should be reported in a future post or conversation with others from the industry. Please reach out if you feel we missed an area of interest or accuracy.