The labor of death. How a skeleton puppet helped me cope with quarantine, isolationism, grief, mourning and the pandemic.

Bony Tony is a skeleton and puppet. A dead entity. Bony Tony represents death in visual form. If you could see death, it would look like Bony Tony. Complete with sparkling red hat and bowtie as was part of his original costume. As a representation of death, the performance and embodiment of this character is challenging and rewarding both. Sometimes even cumbersome as I have promoted Bony Tony as a social media influencer and creative force for good for many years now. To have a Bony Tony mission seemed a natural progression of my work with him. If I am to embody death when performing the character, I should have a reason for doing so. Performing in the darkness of life can have consequences and having an intention and purpose helped align the character with my own values.

Bony's purpose - to help ease the pain and taboo of death as a topic for conversation and well-being. By acknowledging and discussing death, we are able to process and accumulate knowledge of our reaction to the topic as a means for health and healing in a real-time feedback loop. To create engaging and uplifting experiences where people and puppets interact to establish a layer of understanding between the conscious and subconscious mind.

This occurred in a great wave of interest and demand for Bony Tony during the pandemic. While the rest of the world went into lock down mode, I was gifted the opportunity to run a small puppet animation studio and produce Bony Tony segments that were being watched more than ever. Bony Tony's time had seemingly come. It was now the moment for him to produce some of his most effective work. While the world was mourning, Bony Tony was there.

Many partners are still needed. I have reached out to establish partnerships within the industry of palliative and hospice care, including an interview with Stephen Jenkinson on the topic of discussing death with children. I am also now a trained Hospice of the Valley facilitator.

Great care must be given to how the youth perceives a representation of death in a physical form. Bony Tony is a responsibility. I take my work with Bony Tony very seriously as a means of communicating compassion to the world. The youth need to experience radical forms of self expression with positive intentions.

Carrying the character of Bony Tony has been a mission of mine for 23 years now. Meeting the Skeleton Puppet Theater troupe in 1999, led me down a path of creative discovery and collaboration.

Collaborations have included such people as Creator, Writer and Puppeteers Pete DesRosiers, Character Designer - Georgann Prince, Musician - Randy Greer, Costume Designer - Ruth Anne Greer and many others including Cinematographer - Brian Thorsen, Musician - Paul Boruff, Art Director - Todd Shealy, Fabricator and Partner - Ryan Gallagher, Photographer - David Dupree, Jim Burk, Nicole Clemetson, Paul Markow and many other amazing artists in their own right. Also should be mentioned is Animator Daniel Fleck who created the underground tomb scene with ghosts, bats and spirits. All collaborators are owners of copyright as stated in the credits of each program developed and published by Imaginology. 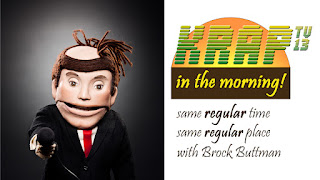 There is an entire town of characters we have brought to life over the years. Brock Buttman (Randy Greer) has perhaps the most public exposure, having been the man on the streets and reporter for KRAPTV13. His personae engaged him with the fascinating characters and TV moments including Comicon and Roller Derby.

We have explored very little of what's possible with these characters and stories and look forward to further development. We need your support now more than ever!
Get to know Bony Tony. Bony Tony wants to be your friend and your favorite social media dead guy @ogbonytony on Instragram, Facebook and TikTok. You can also find videos at https://www.youtube.com/@imaginologyllc.
In memory of David Knight aka the original bone daddy, Bony Tony.

Posted by Imaginology at 2:09 PM